Italy faces a period of low growth and high inflation due to its manufacturing-based economy’s reliance on Russian energy and vulnerability to volatile raw material prices and disrupted supply chains, but stimulus from EU funds should prevent stagflation.

The prolonged Russia-Ukraine war will adversely affect all countries dependent on Russian oil and gas. Economies with large international manufacturing sectors are also exposed to the global supply chains disruption from China’s continued zero-Covid strategy. In Europe, Italy (BBB+/Stable) is among the most vulnerable, along with Germany (AAA/Stable).

Given Italy’s energy dependence on Russia – accounting for 50% of coal, 40% of gas and 17% of oil consumption in 2020 – the EU’s increasingly tough sanctions, set to include oil by the end of the year and possibly gas in the medium term, dim the prospects for growth and stable prices in 2022-24.

Regardless of government efforts to substitute Russian oil and gas near term, which would only partially offset the immediate impact of an embargo, the absence of cheap and available substitutes at the required scale will necessarily lead to higher inflation and lower output over the coming years. We believe the impact of the EU’s Russia sanctions on Italy will be far from temporary.

We have revised downwards our growth forecast for Italy for 2022 to around 2.0%-2.5% from about 4% before the war. For 2023, we expect growth around 1.5%-2.0%. As a result, Italy will reach pre-pandemic GDP only in Q4 this year, about six to nine months later than originally forecasted. 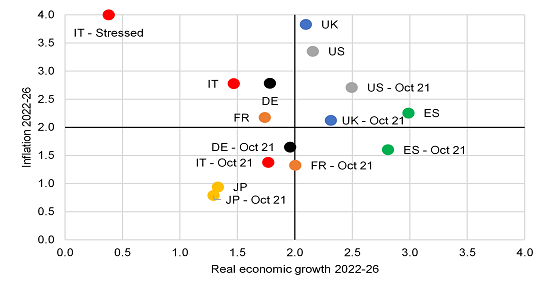 A growth baseline for this year of 2.0%-2.5% implies average quarterly growth of 0% for the rest of the year. After Italy’s real GDP contraction of -0.2% in Q1 this year, zero growth for the remaining quarters would result in 2.2% annual growth given base effects.

Critically, our baseline projections assume no gas shortages. Should these materialise in line with the Banca d’Italia’s adverse macro-economic scenario, the economy would contract by 0.5%-1.0% in 2022 and 2023, while inflation would increase to around 8% in 2022.

In this stressed scenario, assuming annual growth of around 1% and inflation of around 3% for 2023-26, broadly in line with the IMF’s forecasts, Italy would experience the most adverse combination of low growth and high inflation among large, advanced economies – a reflection of near-term vulnerability to surging energy prices and weak medium-term growth prospects.

Italy’s inflation rate in April stood at 6.2% YoY, down from 6.5% in March, pointing to early signs of deceleration in price pressures. Still, even in an unlikely scenario of convergence to a 2% inflation rate by year-end, Italy’s annual inflation rate would average about 4.5% this year. The energy price index component rose about 70% YoY in the past three months.

Looking at the medium-term economic outlook, we estimate Italy’s medium-term growth potential at about 0.8%, incorporating declining working age population projections and modest productivity improvement. This compares with the IMF’s medium term growth estimates at just 0.5%, significantly below the government’s own forecasts for medium term growth of around 1.4%.

Italy’s growth prospects would be even worse, with stagflation in 2022-23 a more likely outcome, were it not for the EU’s significant, and now very timely, recovery funds. The EU is set to disburse about EUR 70bn, or about 4% of 2021 GDP, for Italy during the 2022-24 period under the Next Generation EU programme, equivalent to an annual boost to output of around 0.5% of GDP.

In addition to the direct EU stimulus, associated reforms of Italy’s tax system, the judiciary, public administration, and competition should gradually bolster Italy’s growth outlook, potentially adding more than 10pp to real GDP in the long term, according to government estimates.

Still, despite the frontloading of targets related to reforms under the Draghi government, the implementation of growth-friendly reforms after 2023 might falter ahead of next year’s elections, particularly given Italy’s fragmented politics, weighing down on Italy’s medium-term growth outlook and informing our conservative growth estimates.

Scope takes no action on Slovakia