The Russian government, helped by the Bank of Russia, has used windfall export revenues to mitigate the immediate domestic economic impact of the war in Ukraine and sanctions, but the longer-term outlook has worsened.

The Russian economy is likely to return to its pre-war level of output only by around 2030. By end-2023, GDP will be roughly 8% smaller compared with where output was in 2021, less drastic than we had once expected but nonetheless a stark contrast with growth in other G-20 countries.

Thereafter, in the absence of significant economic restructuring, the Russian economy’s growth potential will diminish to 1.0-1.5% a year from 1.5-2.0% before escalation of the war in February, far below that of most of central and eastern Europe where living standards are on average considerably higher.

Sanctions, capital controls and heightened environmental, social and governance risks have raised short- and long-term risks associated with investment in the Russian economy, putting off investors.

Private capital outflows rose to an estimated USD 64.2bn in net terms in Q1 2022, nearly four times the level compared with the same period last year, nearly offsetting a huge current account surplus of USD 68.4bn in the same period (Figure 1). We expect the private sector to pull out more capital from Russia this year than the net USD 152bn in 2014 when Russia annexed Crimea.

The accumulation of foreign assets by non-financial corporates will be difficult to reverse over the foreseeable future as sanctions trigger more private-sector divestment.

Transforming Russia’s economic model to sustain greater economic isolation in the long run will require profound reform to wean the economy off its long-standing reliance on the commodities sector. Such reforms require reducing the state’s role in the economy and promoting the private sector – hard to square with the increasing authoritarian approach of the current government.

The Russian state is estimated to account for about one third of Russian economic output and half of formal-sector employment, much higher than that in most OECD countries. Such dependence has discouraged private investment, held back productivity and aggravated economic inefficiencies.

Total investment in the Russian economy amounted to 22% of GDP in 2021, materially lower than in most EU central and eastern European countries, such as Hungary and the Czech Republic, where the investment ratio was about 30%. Low investment will constrain Russian growth for years to come.

As international sanctions have tightened since 2014, foreign direct investment has dropped, falling to USD 5bn a quarter, on average, since 2015 from USD 13.6bn in 2010-13. More importantly, imports have also collapsed since February, including of high-tech goods, from advanced economies.

Figure 2. Russia is reliant on imports of high-tech goods
Share of foreign value added in final demand by industry in Russia, 2018 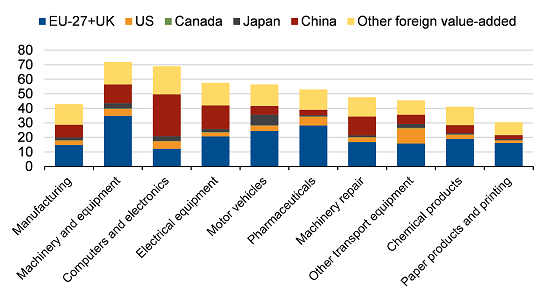 Russia heavily relies on imported components in machinery and electrical equipment, computers, automobiles and pharmaceuticals sectors. The share of foreign value added exceeds 50%, with about half from the EU, the US, the UK, Canada and Japan (Figure 2). Such a high proportion of foreign-made goods cannot be easily substituted with Chinese imports or local alternatives.

Chances that the government embarks on substantive reform near term are low if only because the recession, capital outflows and sanctions are likely to lead to nationalisation of more businesses unable to cope or abandoned by their foreign owners.

A shrinking labour force, in addition to slowdown of productivity growth, had reduced the potential growth rate of the economy to less than 2% a year in the pre-2022 period from nearly 4% in the 2000s.

According to Rosstat, the ratio of working-age (15-64) population to old-age (65 and over) population has steadily declined since 2011, reaching a ratio of 4.1-to-1 by early-2022 from 5.6-to-1 in 2011. In other words, the number of people retiring has been outpacing those entering the labour market. This ratio is projected to deteriorate further to 3.4-to-1 by 2030 (see Figure 3 below), due to a shrinking population and ageing dynamics, according to UN forecasts from July 2022.

The war and an acceleration of labour outflows from Russia – with estimates of several hundreds of thousands of persons leaving since 24 February, most of them educated and highly-skilled – further worsen demographic decline, reducing output and productivity growth – underpinning our estimate of Russia’s increasingly limited potential for longer-run economic growth.

Figure 3. Russia's demography no longer compares so well with other CEE countries’
Working-age (15-64) population over old-age (65 and over) population, ratio

Scope takes no action on Romania

Scope affirms the Republic of Malta's credit ratings at A+ ...