Central and Eastern Europe: Russia’s war in Ukraine defines mounting credit risks this year and next

The economies in the region will continue to grow for the full calendar year in 2022 and 2023 in Scope’s baseline scenario, despite the risk of technical recession in several countries.

Across the region’s 11 EU member states, full-year growth will average 3.8% this year and 3.3% in 2023, supporting stable credit outlooks of many sovereigns. Growth will also continue in Georgia (BB/Stable), Serbia (BB+/Stable) and Turkey (B-/Negative). However, growth in Turkey of 5.8% in 2022 and 3.5% in 2023 is set against a backdrop of weak governance, making high inflation worse and piling pressure on the country’s external accounts. Such factors increase the risk of financial crisis, underpinning Scope’s downgrading of Turkey’s foreign-currency ratings to B- with a Negative Outlook in March this year.

Russia’s economy faces an exceptional set of circumstances following its escalation of the war in Ukraine in February. “The Russian economy will be significantly damaged by its decoupling from the West in the long run, leading to collateral damage for other CEE economies in the near-to-medium run,” says Giacomo Barisone, Head of Sovereign and Public Sector at Scope. “Inflation will accelerate even as growth slows from the second quarter of this year.”

“We foresee an L-shaped recovery in Russia medium run, with the economy entering severe recession this year equivalent to around a 10.5% contraction followed by a long period with weak or no growth,” says Levon Kameryan, Associate Director at Scope. “We see the recovery in the rouble as unsustainable, given it is partially based on capital controls. From 2023, an EU boycott of Russian oil will have material adverse implications for the value of the currency.”

Ukraine’s economy is on course for a contraction of nearly a third after Russia’s escalation of the war. On 22 July, we revised Ukraine’s foreign-currency ratings to C (one notch above default), from CCC, and placed foreign-currency ratings under review for a developing outcome as the government in Kyiv seeks the restructuring of Eurobond debt and GDP-linked securities. 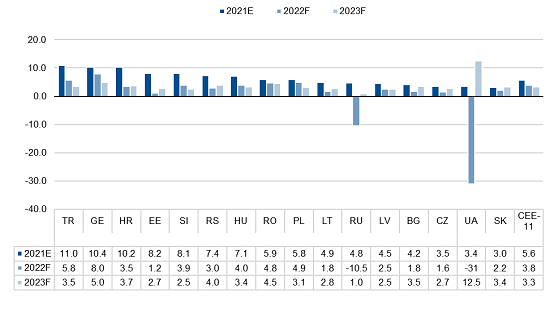 The impact of the war on growth in the CEE region will remain severe during the third and fourth quarters of this year, gradually decreasing by the end of the year but lingering well into 2023, via three main channels.

First, higher prices for energy, food and other commodities in the near term are pushing up inflation, squeezing household and corporate budgets and placing further strains on external-sector and government finances. Most CEE economies are net energy importers and are heavily exposed to elevated and volatile European gas and oil prices.

“External security risks for the CEE region, with many countries bordering Russia and/or Ukraine, have increased since escalation of the war though NATO membership reduces the likelihood that the conflict will spill over to borders of the CEE countries in the alliance,” says Kameryan.

Scope takes no action on Romania

Scope affirms the Republic of Malta's credit ratings at A+ ...